Vitamin D – what’s all the fuss about? 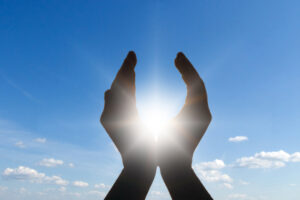 You may have noticed that vitamin D has hit the headlines more than once in the past few weeks: a deficiency has been linked to Sudden Instant Death Syndrome in children, causing concern that some parents may have been mistakenly accused of abuse in cases of potentially suspicious deaths and injuries. Health professionals have been urging the government to review the advice on vitamin D supplementation, and only last week the Chief Medical Officer for England has announced that she will be raising concerns with GPs, nurses and midwives about vitamin D deficiency among children.

So there’s a lot of talk about vitamin D in the media right now, but don’t make the mistake of thinking it’s something that isn’t an issue for adults. At this time of year, a large percentage of the UK population is deficient in vitamin D, and at the very least, it is likely to be affecting your mood and your immune system. It may also be storing up health problems for the future. So what do you need to know about vitamin D?

Let’s clear one thing up right away: vitamin D is not actually a vitamin. The active form of vitamin D has the chemical structure of a hormone, and unlike vitamins, which need to be sourced from the diet, it can be produced by the body when it is exposed to sunlight. In recent years, with the focus on sun protection, people have been wearing sunblock, which inhibits the synthesis of vitamin D by the skin, and this may be contributing to increasing deficiency levels. Put together with the general lack of sun in the UK between October and March, it’s not surprising if you’re feeling low and struggling to keep colds and flu at bay. It’s no accident that people generally feel an increased sense of well-being in the summer months.

For many years vitamin D has been considered to be vital for bone and tooth health, and a deficiency is associated with the childhood condition of rickets. As a result, vitamin D supplementation is advised during pregnancy to ensure optimum development of the foetal skeleton, and also for older women to protect against osteoporosis. If you’re concerned about bone health, then make sure you’re not taking calcium supplements in isolation, as vitamin D is required for the absorption of calcium by the body. However, emerging evidence suggests that a vitamin D deficiency may have other important health consequences.

You may have read about the recent disturbing statistics about Scotland; it has the highest rates of multiple sclerosis in the world, and this is believed to be associated with vitamin D deficiency. Current research is also exploring the link between vitamin D and heart disease and some cancers. There is also believed to be a link between a lack of vitamin D and mental health issues, with potential  consequences of low mood, depression, and age-related conditions such as Alzheimer’s disease. Vitamin D underpins an effective immune function and our understanding of it is developing very fast as new research continues to explore the protective effects of vitamin D against chronic disease.

So, this is what all the fuss is about and you can see there are many reasons to make sure that you have optimal levels of vitamin D. If you’re at all concerned, then ask your GP to test your vitamin D levels. The easiest way to boost your vitamin D is by spending a few minutes each day in the sun, without sunblock. This should be long enough to synthesise vitamin D, but not enough to cause skin damage through sunburn. Of course that depends on the strength of the sun and your own sensitivity, so it’s a matter of using common sense.

If that’s a problem, as you spend most days tied to your desk, or find it difficult to get outside for any other reason, then you may want to consider supplementation. Vitamin D3 is the active form of vitamin D, so may be more effective than a vitamin D2 supplement. Daily requirements will vary according to age and deficiency level, although the NHS general guidelines recommend a maximum of 1000IU per day, so it’s best not to deviate from this without the advice of a health professional who will take into account your individual circumstances.

In short, vitamin D is big news right now, and if you’re struggling with the winter blues then you could do worse than check out your vitamin D levels to see if they’re affecting your health and well-being .