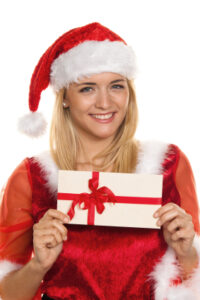 What’s the best breakfast to help relieve a hangover? Which drink will do the most damage to your waistline at the Christmas Party and what should you avoid on the cheeseboard? Test out your knowledge with my fun Christmas Quiz and pick up a few tips to help avoid some of the major health pitfalls that line the festive season.

How did you score? Scroll down for the answers and some handy nutrition tips.
0-4: Beware! Too many poor food choices over the Christmas party season could leave you looking less than your best as you prepare to squeeze into your finery for New Year’s Eve.
5-7: Could do better! This is a good effort, but watch out for the hidden sugar traps that line the festive season, as a lot of damage can be done in a few short weeks.
8-10: Keep up the good work! You obviously keep a close eye on nutrition and health matters and have probably asked Santa to deliver the latest food and nutrition bible that’s been released.

1. Sparkling wine is the one to watch here, as it contains the most sugar. A standard glass contains 2 teaspoons of sugar, almost twice as much as white wine and 3 times as much as red. Of course if you end up sinking a whole bottle of red or white wine at the Christmas party, the sugar content will soon start to mount up, even if you make a conscious decision to keep away from the bubbly, and that little black dress might start to feel rather snug.

2. Olives. As most olives are cured in brine it’s not surprising that they’re a pretty salty snack, even when compared to salted nuts or crisps. But there are so many other health benefits that they shouldn’t be dismissed of hand. They’re an excellent source of monounsaturated fatty acids that studies have shown help to support cardiac health and reduce blood pressure; they also contain anti-inflammatory and antioxidant flavonoids that can help protect against some cancers. And they’re a surprisingly good source of calcium, with just 5-6 olives containing the same amount of calcium as a small glass of milk.  Put like that, why would you bother with crisps?

3. Poached egg with spinach. All of these can help in their different ways but the combination of eggs and spinach is a winner. Eggs are rich in the antioxidant cysteine which the liver uses to break down toxins and leafy green vegetables are rich in both vitamin C (another antioxidant that supports the detoxification process) and B vitamins that are depleted by alcohol and can give just the energy boost you need on Christmas morning if you’ve overdone the egg nog. Yoghurt and nuts might actually work better as a preventative measure before you start drinking: as fat takes longer to digest it can help slow down the release of the alcohol into the small intestine and helping to prevent the build-up of toxins that can lead to a hangover.

4. In terms of saturated fat, none of them are ideal, but Brie is the least bad at 18.2g per 100g, which is just under the guideline daily amount of 20g. Cheddar comes in at 21.7g and Stilton is the worst offender at 23g. The trick here is not to overdo it and to keep to a small slice, rather than scoffing down the entire cheese board!

5. The Oatcake which racks up more than 2½ times the amount of fibre of the other two, which will keep you going for longer and help reduce sugar cravings, so that you won’t keep reaching for the Quality Street.

6. None of these are a terribly healthy option, but in terms of your waistline, a single mince pie is definitely the safest choice as it contains roughly half the sugar found in even a small portion of either the cake or the pudding. And as it’s Christmas, the chances are that you could be tempted to go for a fairly generous portion of cake or pudding, which could do even more damage.

7. Turkey is particularly rich in the essential amino acid tryptophan, which is converted by the body into the ‘good-mood’ neurotransmitter serotonin. High levels of serotonin promote a feeling of wellbeing and will make sure you exude seasonal good cheer to all the family.

8. Chestnut and thyme stuffing. Chestnuts are rich in omega 3 fatty acids which support heart health, hormone balance and have anti-inflammatory properties. Thyme has antibacterial properties which can help promote the correct balance of micro-organisms in the intestines, supporting a healthy digestion and it also contains flavonoids, protective antioxidant plant compounds that support an effective immune function.

9. Lobster canapé, as lobster is very high in purines. Foods that contain a large concentration of purines can lead to a build-up of uric acid which is deposited in the joints and can cause a painful attack of gout. Although the common view is that gout attacks port drinkers, beer is far higher in purines than either wine or fortified wine, and the main foods to watch out for are shellfish and offal such as liver or liver pate if you want to have a pain-free Christmas.

10. Hummus and carrot sticks. This is a great snack for sustained energy, as Santa’s body will burn through the complex carbohydrate in the carrots much more slowly than the refined carbohydrate in the pastry of a mince pie or a sausage roll. By adding protein in the form of hummus, this will slow things down even further, helping him motor on happily until Christmas morning.