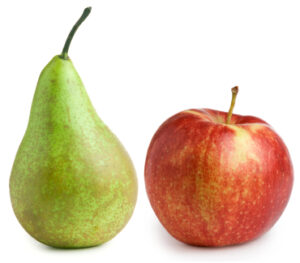 “Doubts have been raised over the idea that being overweight and “apple shaped” increases heart attack risk.” So reports the BBC News website about an article published in the Lancet today. But, think again “Apples”, if you think this means you’ve got away with it, as that’s not exactly what the study says!

For a long time, the received wisdom amongst cardio-vascular specialists was that “Apple” shaped people, who had fat concentrated around the middle were more at risk of heart disease than “Pear” shaped people, with fat mostly on the hips and thighs. As a result, waist-hip ratio has become one of the methods used to assess risk factors of heart disease.

Today’s study, from Cambridge University, shows that it’s more complicated than that. Data from more than 220,000 participants was analysed over a 10 year period to identify the value of this as a measure. The aim was to see whether it was possible to accurately predict the risk of heart disease, based on the waist-hip ration and the “Apple” theory.

The study concluded that assessing the risk of heart disease on waist-hip ratio alone didn’t improve the prediction of risk, compared to other measures, such as blood pressure, cholesterol or history of diabetes, if they are available. Essentially, measuring fat may not be the most accurate method of predicting this risk BUT, because of the clear link between excess fat and cardiovascular disease (and strokes, for that matter), the study also notes that reducing fat levels in general should remain a crucial goal for a healthy heart.

So, this is what the study’s actually saying: “Apples”: you still need to work on reducing the abdominal fat, and “Pears”: you may have been complacent all this time, but it’s your problem too!